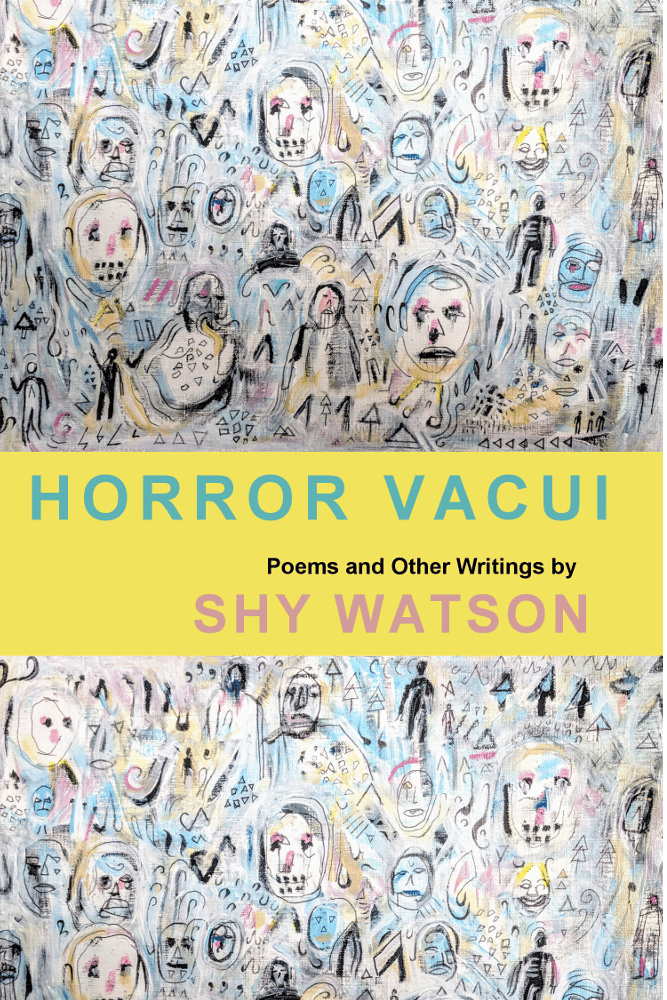 HORROR VACUI: Poems and Other Writings by Shy Watson

I sat in the park eating veggie lo mein, eyes watery with the rotten pleasure of being alive. It had only been minutes since I had complimented the man in the doorway at Ho Wah, telling him that the snake around his neck, which had startled me at first, was beautiful. The trees in the park looked like broccoli, and several people appeared to be in love. A couple played cards in the grass. On the walk home, I noticed a woman whose eyebrows looked tired from trying to say something.

“Shy Watson does her ‘witch shit,’ conjures ancient Rome, and has olfactory flashbacks of men’s body wash on the Chinatown bus. I feel like I’m existing in three centuries when I read this book as the poet transverses different temporalities with ease, with jokes, and with despair. Watson writes with such authoritative dejection, it is alarming, but ultimately, mesmerizing to be drawn into her tone, a kind of millennial off-handiness, but she outwits her contemporaries. Her sharp, exhausted, and devastating observations never dwell in self-indulgence. Instead, she writes power bottom epics, fantasizing about being someone’s spilled orange juice, a piece of human furniture, stating that i turned everyone / i touched / into a freak. What I admire most is her commitment to many forms of ‘wakefulness,’ to forgiving those who betray us even in dream, to taking our hallucinations seriously, to not drawing hard lines in one reality. What is authority without the didactic? This is it.”—MEGAN FERNANDES, author of Good Boys

“Shy’s poems are abruptly smart, a little violent, devious and ongoing, legendary, mythic, not prosey though a little like the voice of god if god decided to speak more collectively for a while. Shy’s poems to me are so so worth it. And they are crafty—also like god.”—EILEEN MYLES, author of Afterglow

“One of my favorite contemporary poets. Such clean open lines. Such room to sprawl out poem per poem. Shy Watson is an artist with a capital A.”—BUD SMITH, author of Double Bird

“There is a new Dante of the mall and the Missouri heart. Read these poems and watch [Shy Watson] tear it all down and then we can drink Frappuccino for free.”—SCOTT McCLANAHAN, author of The Sarah Book

OTHER TASTY HOUSE OF VLAD TITLES YOU MAY ALSO ENJOY: